I’d like to share some information with you that I’ve learn’t over the past couple of years whilst channelling the “Book Of Life”. I discovered that there are five potential levels consciousness open to us here on the Earth Plane. The first one being the level that some indigenous races are living at , the second is our current level of consciousness, and the third level is the Christ level, the level of Unity Consciousness ( the fourth and fifth I’ll mention later). The gifts that this Christ level of consciousness brings are many. One of which is a feeling of connection to All that leads to a Love and Respect for each other. Other amazing gifts that it brings are ultimately an end to disease and an end to ‘Death’- the last enemy is conquered. We are poised on the threshold of this consciousness, which will have far-reaching harmonious effects upon our way of life – an end to selfishness, greed and suffering, in fact the life that we have all been asking for.

What we ask for is always given especially when enough of the collective have asked for it. Of course this is the role of negative experiences, to present us with choice, so we can more clearly know exactly what we do want.

A way of achieving this 3rd Christ level of Being, has been given back to us, through using the energy tool known as the “Book Of Life”. Although it is in 5th dimensional language, it is easily readable since it uses our very own alphabet. 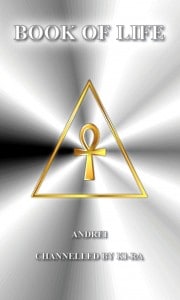 Interestingly I have been told by those that have read parts of it, that the words seem familiar and at some level they already know this book! … ..You may be thinking “How will I understand what it says?” My answer to this question is that it isn’t a ‘Left-Brain’ book that requires intellectual understanding. Rather it is a ‘Right-Brain’ book that only needs to be experienced – a book from the ” Heart “.

The “Book Of Life”, like all sacred texts in existence, has come to us through the Alpha Channel, a Divine stream of Consciousness. It has been kept safely within “The Halls of Amenti”, until such time that we were ready to return to the Golden Christ Light once more. That time is clearly now.

Both the paperback version and the e-book version is available from my website …. As for the last two levels of consciousness, these are now also available through my next two books, “Life Essence” and “The One”.