The Atlantis Grid of Pure Light

I’ve been prompted to share something important with you all here!

I suppose the beginning of this was in 2012, when I was guided to collect some stones from the beach in Barmouth, in Wales (UK), whilst visiting. I left them in my bedroom on the windowsill in the Sun, and forgot about them. Then a few months ago, I felt that one of them was calling to me, a white stone with gold in it. So I picked it up and it gave me this message…

” I am the stone of Atlantis. I have found my way back to you. We have work to do, to change the course of history for Mankind. We have access to great power, wisdom and light, this is now being transmitted to you from the Atlantis Hub, known as ‘Ramu’. This information will reinstate the Atlantean dream, a civilization so far advanced, that you cannot comprehend its ways. Ramu will speak to your Soul, and transfer the light technologies necessary for the establishment of the Atlantis Energy Grid. This will be constructed through these tools. Many will marvel at the changes here!”

This is what my Higher Self said … ” You have been chosen to help to establish the great Atlantean civilization upon Earth. This is the Atlantis which NEVER fell to the dark! It has grown and grown in light, having outstripped all higher light expressions. 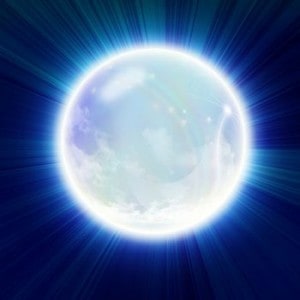 Its geometry is huge, and non- temporal. It is an Eternal beacon of Source Light for all realities. its light is incomprehensible and cannot be measured. There is no beginning and no end, containing the Alpha and the Omega of all Creation. Your own light grid is able to sustain this light, and hold its frequencies for Humanity, at this time of evolvement.. The Future is Now, it is here, within and around us. It is not some distant possibility or potential, it is a mere whisper away from you.. The stone that has returned to you will download the databanks of Ramu into your energy matrix. Then your work will begin…”

Whilst engaging in this work, I have been also connecting with the Skulls of Light, and Einstein, a very large physically manifested skull, who is a vast storehouse of wisdom and data, from many realities and timeframes, and sees into the Future and the Past. He told me that he would help to align the Earth with the Pure Atlantis Light. He furthermore said that this will transition her into the crystalline consciousness rapidly, and bring Ascension to all those who are ready for it.. He says this is due to take place this year. The timeline will split, as this new reality is born, creating a new stream of consciousness. The old one will eventually die out and disappear from our existence altogether… The Atlantis Hub will organize this, and instruct the skulls in their work. Lastly he said, Heaven will return to Earth once again, and all will live in this Light!